Time Magazine, Marriage is a Sacrament – Not a Science 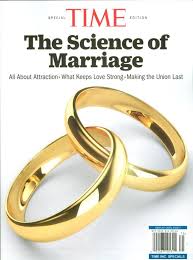 I just picked up Time Magazine’s special edition issue on The Science of Marriage.

Interesting take. That is, if you detest the institution of marriage and choose to see it through the eyes of an  impassioned skeptic. Here’s the very first paragraph in the issue:

There’s a reason fairy tales always end in marriage. It’s because nobody wants to see what comes after. It’s too grim. Meeting the right person, working through comic misunderstandings and overcoming family disapproval to get to the altar — those are stories worth telling. Plodding on year after year with that same old soul? Yawnsville. – p. 6

Matrimony used to be an institution people entered out of custom, duty or a need to procreate. Now that it’s become a technology-assisted endeavor that has been delayed until conditions are at their most optimal, it needs to deliver better-quality benefits. More of us think this one relationship should – and could – provide the full buffet of satisfaction: intimacy, support, stability happiness and sexual exhilaration. And if it’s not up to the task, it’s quicker and cheaper than ever to unsubscribe. It’s not clear any relationship can overcome that challenge. – p. 6

This is what the world is hearing when it comes to the most beautiful and sacred union available to man this side of heaven.

The article goes on to assert that

“It’s not even clear anymore exactly what couples are signing up for. Marriage is the most basic and intimate of our social institutions but also the one most subject to shifts in cultural, technological and economic forces, many of which have made single life a completely viable and attractive proposition.”

Really? I submit that environmental factors have not lessened the success of marriage. Perhaps one of the problems is a mistaken understanding that marriage can be analyzed in the same way that you analyze a science experiment. That it can broken down into individual ingredients recipe-style; measured and stirred to create a concoction of some sort – whether a happy and fulfilling life enhancer or an abhorrently hideous Frankenstein’s monster, depending on the mix.

To be fair, this issue of Time is not all negative. It is primarily devoted to things like How to Make Your Marriage Last, or The (Real) Key to a Joyful Union – The problem is that these topics are discussed on a backdrop of negative commentary. The entire magazine is full of skepticism. Beauty is nowhere to be found. Yes, they talk about happy marriages; but the talk is pretty cheap. These writers may mean well; but it’s as though they are dissecting a dead body to look for its soul.  You will never find the key to marriage by sifting through all the parts. Nor can you relay an image of a true marital union by starting with a contractual understanding of the relationship. It’s no wonder these writers seem flummoxed.

When marriage is described as a crap shoot where you throw yourself in and who knows what you’ll get, it’s bound to draw disdain. But for that matter, if it’s described as a science, wherein you’ll get the outcome you want, provided you do a, b and c, there is something hollow in the advice. Either perspective is a sure sign that marriage has been horribly misrepresented and people are being duped  by the unpredictable “science” of love.

No doubt this secular perspective is the reason fewer Americans are tying the knot (20% of adults age 25 or older have never been married, compared to 9% in 1960). No longer is marriage seen as a Sacred Union, but rather as an individual choice, not unlike one’s choice of career. Gone are the days when marriage is universally presumed to be “’till death do us part.” In fact, this Time Special Edition, while sharing much data that demonstrates the benefits of marriage – greater happiness, health, wealth and stability, child development  (in all areas) – also includes a section called The Good Divorce. Including the words “good” and “divorce” in the same header misses the point of marriage entirely.

If you want to learn more about marriage, focus less on the science and more on the Sacramental. Even the Source and Summit of our Faith – the Holy Eucharist – has been referred to as “a nuptial sacrament,” in effort to illustrate the amazing union it confers between ourselves and Our Lord. A oneness akin to the sacred union that takes place between a man and his wife.

A sacramental marriage is a “fountain of grace,” according to Alice von Hildebrand in her introduction to (her husband) Dietrich von Hildebrand’s, Marriage: The Mystery of Faithful Love:

As a Sacrament, marriage gives people the supernatural strength necessary to “fight the good fight.” Every victory achieved together over habit, routine, and boredom cements the bonds existing between the spouses and makes their love produce new blossoms.

Also, because it explicitly and sacramentally unites the spouses with the infinite love that Christ has for each one of them, sacramental marriage overcomes the tragic limits of natural marriage and achieves the infinite and eternal character to which every love aspires. – p. xiv

No natural human good has been exalted so high in the New Testament. No other good has been chosen to become one of the seven Sacraments. No other has been endowed with the honor of participating directly in the establishment of the Kingdom of God. – p. 3

And because of this amazing gift, we who are privileged to take part are called to a higher level of sacrifice:

…Every hour they must recall anew the unspeakably precious gift which God has given in the form of the soul of the beloved. Never must they lose their sense of the wonderful mystery that the other person whom they love loves them too, that the other lives for them, and that they own something far above all other earthly possessions. – p. 35

But we get something priceless for all our efforts:

Let us add that Christian marriage also represents for both consorts a way to attain an ever-increasing union with Jesus. As the bond has been concluded in Jesus and toward Jesus, the increase of conjugal love also means a growth in the love of Jesus. The unique abandonment to the beloved, the life of love which one lives and should live, opens the heart and enables it to love more and more. – p. 75

And about the indissolubility of marriage:

It is considered by many as something oppressive and dispiriting, something which deprives love of its wings and gives it a coercive character. They think that love would vanish with the knowledge that the tie is binding whether love persists or not. But nothing is less true. For the real lover, the consciousness of being indissolubly united with his beloved in Christ, of forming an objectively indissoluble community whose validity is beyond all wavering and all human frailties, is a source of the highest satisfaction. For he wants to be one with his beloved, and he is grateful and happy that this unity can be realized to so great a degree and that it rises above all emotional changes. – p. 59

The bottom line? Watch what you read. When it comes to sacred topics – particularly marriage –  you may want to seek answers from among the great annals of wisdom available within the Church. For only in union with Christ can marriage achieve its true fulfillment, and only an understanding of that truth can allow for any accurate commentary on the subject. Case in point – Archbishop Fulton Sheen so accurately entitled his treatise on the sacramental nature of marriage, Three to Get Married; but if you ever hear that same phrase in the secular culture, you can be pretty sure the reference will be sacrilegious rather than sacramental.

If you’re looking for an accurate view on Marriage, skip the Time Magazine commentary and check out a few of these amazing resources: